Picture Wars is a drawing game. The general premise of Picture Wars is this: First a character is drawn in the center by the defender. The attacker then draws an attack that will put the character in danger. The defender then must then either draw something that will counteract the attack or edit it if possible. Turns alternate.

These rules are made for one purpose: to ensure that Picture Wars is a constant battle of art, quick thinking, creativity, and ingenuity, that no person can create an ultimate, unconditional object to win a game. At first, when we started playing PW, there were no rules. But as we played more and more, we saw that there HAD to be an establishment of rules for guiding those to play. These rules are to keep the playing of Picture Wars an unexpected fun and unpredictable game. As long as you keep in mind that things aren’t always what they seem and you have a very creative mind, then you’ll make a great PW player!

After the defender makes their turn, it is the attacker’s turn again. This of course alternates.

Both the attacker and the defender have something called textboxes (also called labels) that allow many things into the realm of Picture Wars. It simply lets you be more specific in the game. They can be very helpful. If someone uses one and it has no lines bordering it, it can be altered by adding words. You cannot cross anything out or add material if it is bounded. You also cannot have the textbox more than 8 words. The reason why is lets say that you want to label a bomb and in the label you say…

“Bomb that can blow anything up and if it’s disabled it will automatically home in on who it was disabled by and then unleash a napalm cannon that fries anything in it’s path including you. This bomb is also fissure proof, plug proof, on/off switch proof, tamper proof, water proof, basically ANYTHING proof. Let’s just say NOTHING can stop it.”

This is too tedious and unnecessary. It also takes up too much viable space that the attacker may need for future attacks.

Once an object is defined by using a text label, it cannot be redefined.

EVERYTHING is frozen in time at the point of each person’s turn. Nothing goes in motion until the game ends. There is also no limit to how long some one can make a move unless otherwise determined before a game. What this also means is that you never edit anything to reflect time change. An example would be an attacker drawing an asteroid as an attack and then the defender draws a nuke to destroy it and then edits the asteroid to be blown up. You can’t do this.

You can ask for more info if something unclear. An example of this is asking what an attack is supposed to do or how it works. 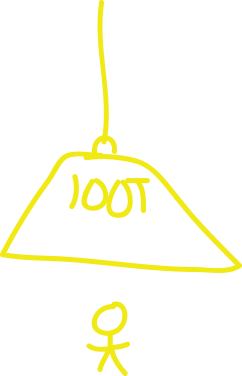 Best used for message boards, this mode allows anyone to join in. A character is drawn like normal but then anyone can either attack or defend as long as it alternates. The same person cannot go twice however. (Attacks then defends)

First PWO Game – The first ever online PW game. I was the defender (in black) with someone else, the attacker, in red.

Via MessageBoard – In this game started on a message board, anyone could join in where people could be either the attacker or the defender
just as long as the standard rules were followed.